Is LED Grow Light a Good Choice for Growing Cannabis? 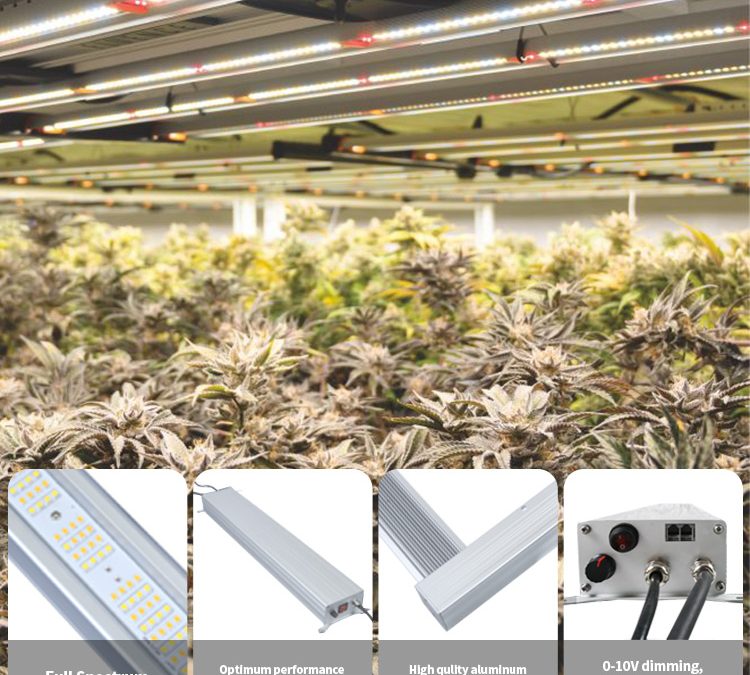 LED grow lights are relatively new in the field of cannabis cultivation, but they have gained popularity in the past few years because of their ability to produce high yields while remaining cool and using a reasonable amount of electricity. Today’s LED models are much better for growing cannabis than the ones available even a few years ago. Many modern lamps are full spectrum or “wideband” spectrum (instead of only red and blue light diodes, which produce a bluish-purple light and are sometimes called “blurples”). Full spectrum light is easier on the eyes and adding at least some amount of green light to blurples typically results in healthier growth. Other spectrum colors like red, far-red, and infrared are important for the budding/flowering stage. LED manufacturers have developed specialized lenses to point the light directly to the plants and increase penetration, resulting in bigger yields for the same amount of light compared to older models. There are also many different form factors, with everything from the casing to the size of the diodes varying from model to model.

There are 3 main types of LEDs that are most commonly used for growing cannabis. Each type of model has its pros and cons, so there isn’t yet a “best” LED type. Some are better for some situations than others.

They tend to have relatively low wattage diodes which are spread out over a large area on a board. These are becoming more popular lately, and seem to offer particularly good results for the amount of wattage used.

Quantum LED Grow Light
The “Octopus style” LEDs are similar to Quantum Boards in that the individual diodes are spread out and tend to be on the smaller side, but they are set on a panel with “arms” like an Octopus as opposed to a solid board. One very popular example is the YouLumi line of LED lights. These typically have an extremely high price, but growers who use them swear they get better results than any other type of LED to grow light. These grow lights use huge COB (Chip on Board) LED “bulbs”. Each COB is incredibly bright and intense because they contain multiple LED chips in a small area. COBs produce more intense light than other types of LEDs, and each COB uses a significant amount of electricity.

Instead of having dozens of small diodes, COB style LED grow lights typically only have a handful of huge COBs, each with strong lenses to direct the light down into the plant. These are rapidly gaining in popularity and are known for having deep penetration into the plant canopy.

Many growers are making the switch to LED lights and for good reason. There are many advantages to using LED lights when growing cannabis.

Affordability: For many, the main reason is that they are relatively inexpensive when compared to the much pricier HID setup. This is especially true if you are growing a smaller number of plants. This was not always the case. When LEDs were first gaining momentum among growers, the technology was still fairly new and had not entirely been perfected. Think about how expensive and inconvenient cutting-edge technology like smartphones was when they first came out, and it often was not worth it but now they are everywhere. LEDs had a similar path to relevance.

Energy savings and privacy: Another thing to consider is how much money LED cannabis grow lights will save you on your energy bill. HID lights are good at what they do, but the amount of energy they use will cause your energy bills to skyrocket. This not only hurts your pocketbook, but it can also draw unwanted attention in your direction either by a landlord and/or the police. When people had to keep their weed growing activities under wraps, spiking electricity bills often gave them away.

Reduced water usage: Not only are LED lights more energy-efficient, but you will also save on water usage as well. HID lights use a lot of energy, which in turn produces more heat. This dramatically increases the temperature of the grow room, causing your plants to consume more water. Cannabis is already quite the water hog when compared to other plants and growing even just a small amount of plants uses a lot of water. Any way to reduce water consumption is great for the environment and your utility bill.

Durability: They also last a lot longer. You can expect around 50,000 hours of working use of an LED light, compared to between 2,000 and 3,000 hours with an HID light. This is because LED lights do not have a filament to burn. What is most important is to have quality LED that can provide a full spectrum light source for your cannabis growing operation. Newer LED lights will give a light output that is the closest to natural sunlight and will have no gaps in the light spectrum. This will ensure that your cannabis plants have access to the full spectrum of light that they need to grow strong and healthy.